The Apostle Paul said in Acts 21:19, “Paul greeted them and reported in detail what God had done among the Gentiles through his ministry.”

Our hearts are so full of praise for the great work He has done in both Kenya adn Uganda on this mission. Our hearts are also full of gratitude to you for joing this mission through prayer and support. We experienced God’s divine intervention in several different ways to make this time of spreading His Word so fruitful. Let us share with you a few of the blessings.

On the flight over an engine went out coming out of Amsterdame and we turned around and changed planes. Praise God for His Divine protection.

Our preparation in Nairobi with Bjorn and Lucy, our co-workers, went smoothly adn we were able to purchase all of the English Bibles adn some Swahili and Kikukuk Bibles there. Because we purchased so many, the International Bible Society decided to give us free Christian Bible study books which we divided out at each place. Praise Jehovah Jireh for His abundant provision. We also were able to photocopy all of the English and Swahili Bible study materials at a low cost. It was too much for us to take with us so we sent part of it on up to Eldoret. We taught 17 different subjects in the seminars with handouts for each one. The organizational logistics of getting the right materials in the right languages at the right place is challenging, but the Lord gives us grace. Psalm 16:2 “You are my Lord; apart from you I have no good thing.”

Our first seminars were in this rural beautiful place where the people have opened their hearts to us. One special story about them is how they responded at the end of the seminars. They took an offering and said, “We are selfish to keep this great blessing of these seminars to ourselves, we must share it with the Christians on the other side of the mountain and with this seed offering we believe that next year you will go to Meru.” They even agreed that some of them will go with us. We were so touched by their faith and concern for the others. Pray with us about Meru.

We have had invitations to teach seminars in 6 new areas in Kenya and Uganda.

Please pray with us about these new areas because we feel that God wants us to go back to the places we have taught before also.

Today we received an email from one pastor telling us, “God has changed and completely healed my marriage. There is more peace, love to my wife, she is now changed completely and I appreciate God sending you to Kitale.”

How wonderful to return to see how the Lord has used His Word in the lives of those we have worked with over several years now. Rachel, one of our interpreters, shared that after last years teaching she began obeying the teaching and started memorizing the Word of God in a disciplined way. Her husband and children joined her. She said the most amazing thing started happening to her. People began coming to her all the time and asking her to share God’s Word with them for their problems. She glowed with the love of the Lord as she shared her testimony. Isaiah 55:10, & 11 says, “As the rain and the snow come down from heaven, and do not return to it without watering the earth and making it bud and flourish, so that it yields seed for the sower and bread for the eater, so is my Word that goes out from my mouth: It will not return to me empty, but will accomplish what I desire and achieve the purpose for which I sent it.”

Thanks to many of you , we were able to take a whole suitcase of ties for the pastors and scarves for their wives. At the end of each days teaching for each seminar we would draw to give gifts. You can be sure no one left early and were so blessed. We also gave some belts, handkerchiefs, and the Christian books. Then at the last we would give two good study Bibles for pastors. We did the drawing by tickets and once they received a gift then they cannot receive another one. Each day at least 35 to 40 people are blessed by the gifts. We could not do this without your support. We only wish you could see those happy faces as they come to pick their gift. One great blessing was that we were able to give away reading glasses to many pastors who were having trouble reading their Bibles. They were so grateful. We are planning to continue doing this in the future because the need is so great and they have so little money.

Our health was mostly great. Deanna had a reaction to the malaria medication and had to adjust it. We both had the usual stomach problems but not enough to hinder any work. Duane had a problem with seeing light flashes in his left eye when we were in Tororo, Uganda. After talking with an ophthalmologist in Oklahoma City by phone and having a local doctor there examine him and after praying, we decided to wait till we returned home and just trust God. He is scheduled for laser surgery on small tears in both retinas this next week. Our living conditions were a little better than we expected because they had a new hotel in Arua. However in Nebbi, we were without water and electricity for 2 days. We also had a pretty strong earthquake there. There were tribal and land clashes in Kenya where many people were killed. They were in the Kitale area just before we were to go there. The Lord protected and we had no problems at all. Deanna’s purse was stolen in Eldoret but it had nothing of major value except it did have her cell phone and medications. Thankfully we never carry our passports around with us. We knew this was spiritual warfare to distract us from teaching the Word which did not work because we went right on with the teaching without stopping or even mentioning the stolen purse.

In all eight seminars there were just fewer than 1800 pastors and their wives who registered. Each one received the Bible study seminar materials in the language of their choice which amounted to around 80,000 photocopied sheets. In Iganga, Uganda we had invited 150 pastors with their wives but when others heard about it they copied the invitation letter and there were 370 who showed up and add to that their nursing babies which were 70 more. Needless to say, changes had to be made to accommodate 440 instead of 300. We copied more materials and some of the pastors who lived in that city took couples to their homes (one pastor had 12 couples sleeping at his home). Instead of serving meals with meat, they just served beans and rice. Thank God we did not have to turn anyone away.

One pastor shared with us that he was one who was not invited but that his family had so many problems that he knew God wanted him to come. His wife had been violently raped and that God had healed their marriage through the Bible teaching of the seminar. Glory to God!

We could really tell you were praying about this because it went so much easier than before. We spent $7000 U.S. Dollars on purchasing Bibles. We gave 1063 Bibles total. We gave 14 Thompson Chain Reference Study Bibles; 8 Amplified Bibles; and 8 Swahili Study Bibles. We bought Bibles in 7 different languages: English; Swahili; Lugandan; Lugbara; Kikuyu; Alur; Adhola. The pastors were so grateful and were given to those who did not have Bibles in their churches. One special blessing was the giving of the Adhola New Testaments. This had just been translated and printed for the first time in their language and the pastors were so thrilled to receive the Bible in the language they preached from. These were the only New Testaments we have 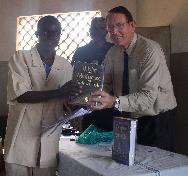 purchased because we prefer to give the whole Bible but made the exception because of this newly translated language. We received an email from a pastor who did not attend the seminars but his pastor friend had attended and received a Thompson Chain Reference Bible. This pastor was thanking us for giving his friend the Bible because all the pastors in the area now have a special Bible to use to help them prepare. Many of the Bibles were given to pastors in villages that had only one or two Bibles in their whole village. One special 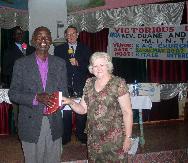 blessing was at Iganga, Uganda where this older pastor sat at the front near us. He had an old worn out New Testament and when he received his new whole Bible he just kept hugging it. Thank you for giving so that the Word of God could be given to so many who would never have a Bible. I cannot think of a better blessing to share.

One last story, when we were in Nebbi many of the pastors rode bicycles up to 80 kilometers (50 miles) with their wives and babies on the back to attend the seminar. These pastors also took back to their church a new Bible for a believer who did not have a Bible. We thank you for partnering with us both in prayer and in giving to minister to these precious servants who give themselves so sacrificially to serving our Lord Jesus. They are always telling us to thank those who make this ministry possible because it is so needed.

Join us in supporting the ministry of MINTOR with Duane and Deanna Hunt:

Reaching the World with the Word

Verse of the Day